What Are Bleeding Disorders?

"Bleeding disorders" is a general term for a wide range of medical problems that lead to poor clotting and continuous bleeding. Health care providers call these conditions by many different terms, including coagulopathy, abnormal bleeding, and clotting disorders. While hemophilia is the best-known bleeding disorder, many types exist, and most are inherited.

Each bleeding disorder has its own range of severity, which is generally categorized as mild, moderate, or severe. Approximately 20,000 individuals in the United States have hemophilia.  Von Willebrand disease (VWD) is the most common type of bleeding disorder, affecting an estimated 1/100 - 1/10,000 individuals in the United States. Each of these disorders causes bleeding and each can be treated.

What Happens When a Person Bleeds?

When the body is injured and starts to bleed, the bleeding stops when a clot forms. The multistep process of clot formation is called coagulation. The word coagulation comes from the Latin word meaning to cause to curdle. When blood clot formation occurs properly, the blood doesn’t actually curdle, but it holds together firmly at the site of the injury.

People who have a bleeding disorder are unable to make strong clots quickly or at all.

Visit Steps For Living, our premier educational website for people living with bleeding disorders, to see the clotting process in action.

Why Is It Important To Know If I Have A Bleeding Disorder?

Finding out that you have a bleeding disorder and getting the medical help you need can really improve your daily quality of life and reduce stress. Besides being an inconvenience, heavy bleeding can be a health risk. The blood loss can cause anemia or iron-poor blood. Anemia means you have a low red blood cell count in your blood. Untreated bleeding disorders can cause dangerous bleeding after:

These bleeding problems can be prevented or controlled with treatment. If you have symptoms of a bleeding disorder, talk to your doctor.

What are the Symptoms Of A Bleeding Disorder?

Finding out that you have a bleeding disorder and getting the medical help you need can really improve your quality of life and reduce stress.

What is a normal period?

What is not normal? 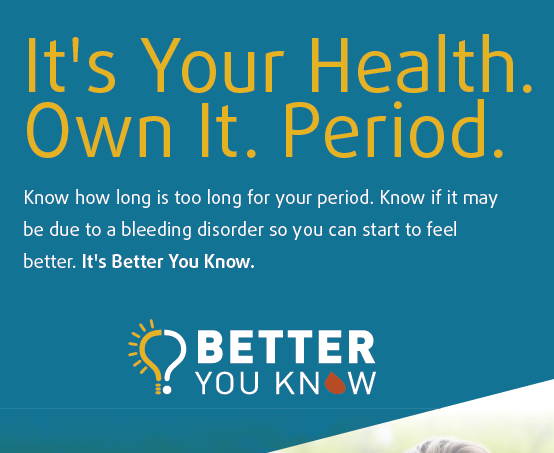 Know how long is too long for your period. Know if it may be due to a bleeding disorder so you can start to feel better!

How to Manage Heavy Periods?

A heavy periods can be annoying and can sometimes interfere with activities you enjoy. But don’t let heavy periods affect the quality of your life. Until you are able to see your healthcare provider, here are some tips to help you cope with heavy periods.

Many women with bleeding disorders have pain during their menstrual period that is more severe than normal cramps. This is called dysmenorrhea. Some women also feel pain in the middle of their cycle, between periods when one of the ovaries releases an egg. If you have excessive pain during or in between your periods, talk to your health care provider.

Learn more about managing periods at Steps For Living our premier educational website for people living with bleeding disorders.